The electric field is calculated from the voltage U at the plate capacitor at which the observed oil droplet just begins to hover. The constant falling velocity v1 of the droplet when the electric field is switched off is subsequently measured to determine the radius. From the equilibrium between the force of gravity and Stokes friction, we can derive the equation. 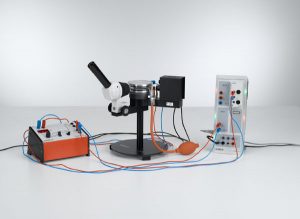 ATN-01-02: Determining the electric unit charge after Millikan and verifying the charge quantification – Measuring the rising and falling speed with CASSY

The oil droplets are observed which are not precisely suspended, but which rise with a low velocity v2. Additionally, the falling speed v1 is measured, as in the variant P6.1.2.1 and P6.1.2.3. The measuring accuracy for the charge q can be increased by causing the oil droplet under study to rise and fall over a given distance several times in succession and measuring the total rise and fall times. 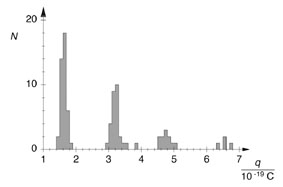 ATN-02-01: Investigating the deflection of electrons in electrical and magnetic fields 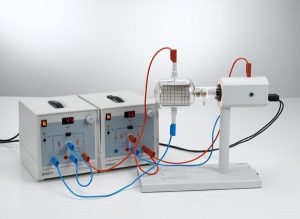 This experiment investigates the deflection of electrons in electric and magnetic fields. For different anode voltages UA, the beam path of the electrons is observed when the deflection voltage UP at the plate capacitor is varied. Additionally, the electrons are deflected in the magnetic field of the Helmholtz coils by varying the coil current I. The point at which the electron beam emerges from the fluorescent screen gives us the radius R of the orbit. When we insert the anode voltage in the following equation, we can obtain an experimental value for the specific electron charge whereby the magnetic field B is calculated from the current I. 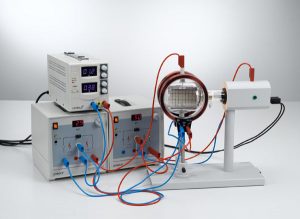 In this experiment, a velocity filter (Wien filter) is constructed using crossed electrical and magnetic fields. Among other things, this configuration permits a more precise determination of the specific electron charge. At a fixed anode voltage UA, the current I of the Helmholtz coils and the deflection voltage UP are set so that the effects of the electric field and the magnetic field just compensate each other. The path of the beam is then virtually linear, 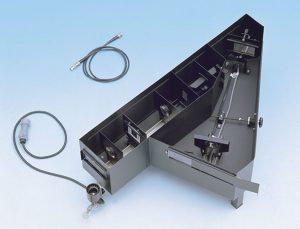 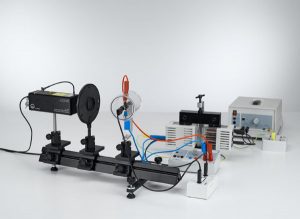 The experiment demonstrates how a Paul trap works using a model which can be operated with no special requirements at standard air pressure and with 50 Hz AC. When a suitable voltage amplitude U0 is set, it is possible to trap lycopod spores for several hours and observe them under laser light. Tilting of the entire ion trap causes the trapped particles to move radially within the ring electrode. When a voltage is applied between the cover electrodes, it is possible to shift the potential along the z-axis. 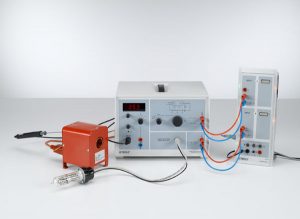 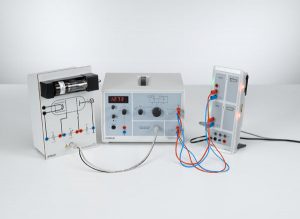 ATN-06-01: Electron spin resonance at DPPH – determining the magnetic field as a function of the resonance frequency 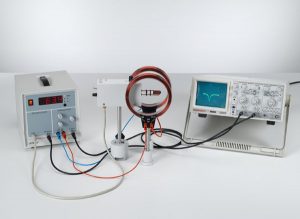 The experiment ATN-06-01 verifies electron spin resonance in diphenylpicryl- hydrazyl (DPPH). DPPH is a radical, in which a free electron is present in a nitrogen atom. In the experiment, the magnetic field B which fulfills the resonance condition the resonance frequencies n can be set in a continuous range from 13 to 130 MHz. The aim of the evaluation is to determine the g factor. 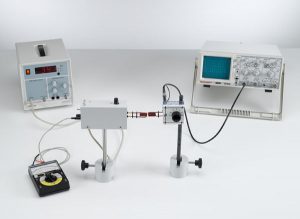 The object of the experiment ATN-06-02 is to verify resonance absorption using a passive oscillator circuit.

ATN-07: Physics of the atomic shell 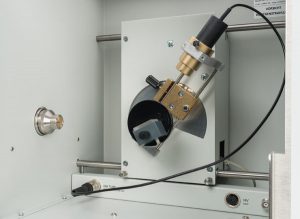 ATN-07-01: Bragg reflection: diffraction of X-rays at a monocrystal 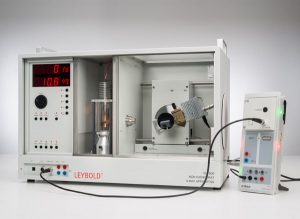 The object of the experiment ATN-08-01 is to record the X-ray fluorescence spectrum of a target and to use the known energies for calibration of the energy axis. The target is made of a zincplated steel and emits several fluorescent lines.

ATN-08-02: Recording the energy spectrum of a molybdenum anode

ATN-08-02: Recording the energy spectrum of a copper anode

ATN-08-04: Investigation of the characteristic spectra as a function of the element’s atomic number: K-lines