The MGAC is an annual talent-search program to test the students’ limit physically, mentally, psychologically, intellectually and ethically. The various challenges include cognitive skills, leadership, teamwork, communication, integrity and personal growth, which are tested via amazing race games, CSR programs, strategy-based games, marketing pitch and many others. Students’ competencies are, undoubtedly, stretched around strategy, behavior, and general knowledge.

“We all should be proud in recognizing their achievement. Although they are still in semester 2, these students can surely surpass others from more advanced semesters, including some participants from master’s-degree programs regionally. Though arriving at the competition as underdog, these students excellent! To say the least, this is such an objective measurement to indicate that what we all have done thus far is on the right track,”” said Samuel Anantadjaya, the Dean of the Faculty of Business and Social Sciences. 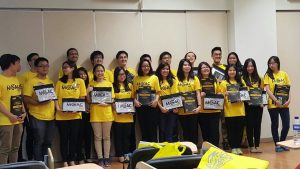